RESOLUTION OF COUNCIL OF MINISTERS OF THE REPUBLIC OF BELARUS

The Council of Ministers of the Republic of Belarus DECIDES:

Approve the enclosed Concept of creation of capacities on production of alternative fuel from solid utility waste and its use.

Prime Minister of the Republic of Belarus

Approved by the Resolution of Council of Ministers of the Republic of Belarus of August 22, 2016 No. 664

In the Concept the following main terms and their determinations are applied:

pre - RDF - fuel - remaining balance in structure of TKO after extraction of small fraction up to 80 millimeters in size in the form of organic chemistry and nonflammable components, and also extraction of main types of the secondary material resources (further - VMR) which are of the greatest value from the point of view of their further realization. According to article 1 of the Law of the Republic of Belarus of July 20, 2007 "About the address with waste" (The national register of legal acts of the Republic of Belarus, 2007, No. 183, 2/1368) pre - RDF - fuel actually is VMR;

RDF fuel - the solid fuel made from pre - RDF - fuels and intended for energy development which characteristics are determined according to the existing standards or specifications of the producer of fuel. According to article 1 of the Law of the Republic of Belarus "About the address with waste" RDF fuel actually is secondary raw materials.

Chapter 2. Purpose and tasks of the concept

The purpose of the Concept is determination of conditions and directions of expansion of scopes of TKO by implementation of technologies and the equipment on production of RDF fuel for its subsequent use at cement works (for decrease in cost of production of cement), in utility heat-and-power engineeering as renewable energy resource (local type of fuel) that will provide decrease in negative impact on the environment and reducing amounts of burial of TKO according to target indicators of the Concept according to appendix 1.

Tasks of the Concept are:

determination of the directions and possible subjects to use of RDF fuel;

provisional estimate of necessary investments and financing sources of production and use of RDF fuel.

Chapter 3. General characteristic of RDF fuel and international experience of its use

Thanks to such benefits as reducing amounts of the buried waste and consumption of the imported power sources (coal, oil products, gas), use of RDF fuel is widespread in developed countries, including the countries of the European Union.

Level of use and burial of TKO 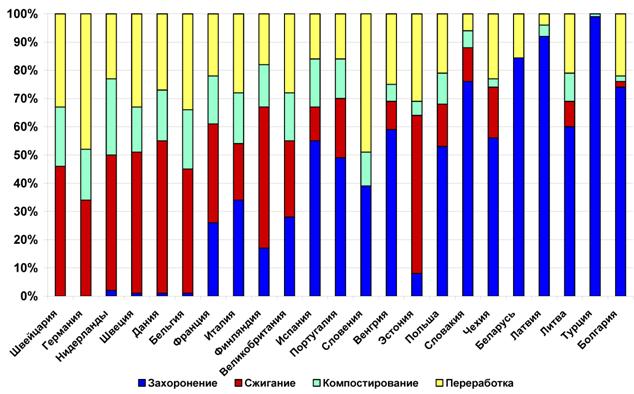 Production of RDF fuel is widely used in the states with the high level of separate collection of waste (Germany, the Netherlands). This fuel the TKO high-calorific fraction which is not allocated in the course of collection and sorting of waste as secondary raw materials is included. By estimates, the amount of the RDF fuel made from TKO in the European Union makes about 3 million tons per year.

Most actively production of RDF fuel develops in Belgium, Finland, Italy and the Netherlands in connection with its reference to local types of fuel and investment into construction of the plants on its burning.

According to the legislation of Poland it is forbidden to bury in polygon waste with calorific capability more than 6 megajoules on kilogram. On average from one ton of waste 350 kilograms (35 percent) of RDF fuel with humidity of 12-14 percent and with a caloric content of 18-20 megajoules on kilogram turn out. Waste disposal cost in this country constitutes 50-90 US dollars for ton (including tax on burial of TKO). Since 2013 in Poland the tax on waste on one person in month is established. Depending on the region and costs on burial its size fluctuates within 3-5 US dollars a month.

These measures create administrative and economic conditions for RDF fuel production as type of business activity.

The world practice shows that RDF fuel is used generally in the cement industry as alternative fuel, replacing coal and natural gas. The high temperatures used in these productions give the chance to burn such type of fuel, without doing harm to the environment. Experience of the countries of the European Union demonstrates that about 70 percent of the main technology fuel spent for clinker roasting by cement works can be replaced with RDF fuel. Also in case of joint burning with coal and other types of fuel RDF fuel is used on thermal power plants, on the specialized boiler equipment. The comparative characteristic of types of fuel on caloric content is provided in table 2.

The comparative characteristic of types of fuel on caloric content

In the countries of the European Union development of alternative fuel is the accurately created separate direction with normative and legislative bases. In Belarus and Russia this process is in initial stage in spite of the fact that some organizations already actively use separate types of alternative fuel from waste (worn-out tires, the fulfilled engine oils, waste of agricultural production and another).

For production of RDF fuel the following components of TKO are used: rubber, paper, tree, cardboard, skin (leather substitutes), synthetic fibers, textiles, polymers and others. The corresponding structure of waste is created depending on local conditions. As a rule, RDF fuel consists for 44-51 percent of carbon, for 29-36 percent of oxygen and for 5-7 percent of hydrogen. Also there are different weighting compounds and impurity containing heavy metals depending on origin of waste. Small amounts contain nitrogen, sulfur, chlorine, potassium, sodium and other elements.