RESOLUTION OF THE PRESIDENT OF THE REPUBLIC OF UZBEKISTAN

For the purpose of broad informing the population of the republic, especially youth, about role and value of institute waved in forming of the democratic state and civil society, the solution of social problems, and also comprehensive publicizing of experience of activities makhally, first of all, in spiritual and moral education of younger generation, strengthening of family values, support to young families, the address help to elderly people and socially vulnerable segments of the population, employment, improvement of social conditions of accommodation of people and improvement of the territories:

creation as a part of National broadcasting company of Uzbekistan of new republican round-the-clock digital educational teleradio channel "Mahalla" in the form of the state unitary enterprise;

to transfer of radio channel of Mashjal from SUE Teleradiokanal Sport in structure of newly created teleradio channel of "Mahalla" with the available number of staff and the provided expense budget.

broad informing the population of the country on role and value of institute waved - the unique national education created throughout centuries-old history of the Uzbek people as self-government institutions of citizens, in sustainable development of society and state, the solution of the social problems, vital for the population, achievement of target task of transition from the strong state to strong civil society, and also publicizing of experiment on creation of the organization-legal mechanisms providing all-round development and effective activities waved;

creation of the programs opening role and value of institute waved in approval in the society of high spiritual and moral values, careful and respect for national customs and traditions, preserving and strengthening of the world and stability in the country, interethnic and interfaith concord, ensuring public safety and law and order on places;

preparation of teleradio programs on promoting of the best practices of work exemplary makhally on strengthening of family values, forming in families of the healthy spiritual and moral circle, the atmosphere of mutual respect and consent, to strengthening of care and attention to people of respectable age, rendering assistance in education of younger generation, especially girls, to prevention of early marriages, spiritual and psychological training of young men and girls for creation of healthy and strong family, the organization of weddings, other celebrations and ceremonies without excessive grandiosity, the organization of targeted material and moral support to socially vulnerable segments of the population;

extended coverage of activities of makhally employment of the population in the solution of questions, development of small business and private entrepreneurship, workmanship, home work and family business, increase in level and quality of social infrastructure waved, the equipment of nurseries and sports grounds, improvement and gardening of the territories, environmental protection;

the organization of teleradio programs for expansion of social partnership makhally with bodies of pension, social and medical support, national education, culture and sport, public structures in questions of rendering permanent attention to elderly people and disabled people, spiritual and moral education of youth, religious education, employment of graduates of professional colleges and lyceums, and also to strengthening of functions waved in system of public control over compliance with law and activities of state bodies of management for these questions.

organizational structure SUE Teleradiokanal Mahalla with the extreme number of staff in number of 154 units, including managerial personnel - 10 units of which 91 units are created due to optimization of number of employees of the companies and organizations which are part of National broadcasting company of Uzbekistan according to appendix No. 1;

updated organizational structure of system of National broadcasting company of Uzbekistan with the general number of staff in number of 4 657 units, from them managerial personnel - 213 units, according to appendix No. 2;

structure of central office of National broadcasting company of Uzbekistan with the extreme number of staff in number of 230 units, from them managerial personnel - 58 units, according to appendix No. 3.

Extend SUE Teleradiokanal Mahalla of payment term of work and material stimulation to workers, provided for workers of the operating teleradio channels of National broadcasting company of Uzbekistan.

4. Determine that financing SUE Teleradiokanal Mahalla until the end of 2014 will be performed at the expense of the means released as a result of optimization of the number of staff of employees of the companies and organizations which are part of National broadcasting company of Uzbekistan.

6. Establish average daily amounts of television broadcasting since January 1, 2015 according to appendix No. 4, having provided in digital format at the same time step-by-step transfer in 2015 - 2020 of Navo TV channel on complete self-sufficiency and increase in share of the off-budget income in financing of expenses of TV channels of "Madaniyat va ma" of rifat ", " Dunyo bo "ylab", "Kinoteatr" and territorial subdivisions of National broadcasting company of Uzbekistan.

7. National broadcasting company of Uzbekistan together with the Ministry of Justice of the Republic of Uzbekistan and other interested ministries and departments to make in the Cabinet of Ministers offers on the changes and amendments in the legislation following from this resolution in a month.

8. To impose control of execution of this resolution on the Prime Minister of the Republic of Uzbekistan Sh.M.Mirziyoev.

President of the Republic of Uzbekistan

to the Resolution of the President of the Republic of Uzbekistan of December 17, 2014 No. PP-2273 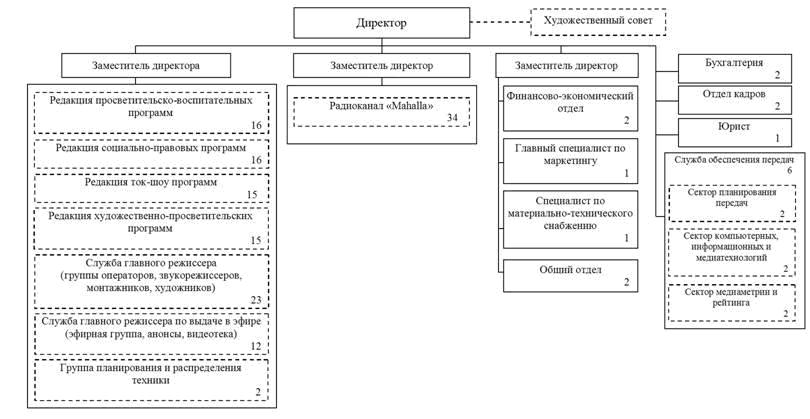